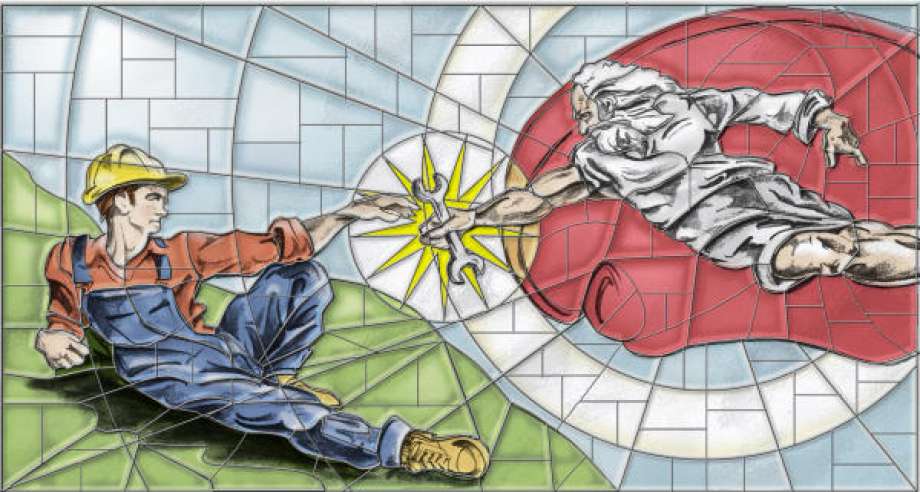 The Protestant work ethic is the notion that your worth is a function of your hard work: what you produce. This is the mental illness of our time. The idea of hard work put forth in American society is a burden that crushes the broken and disenfranchised and suffocates the souls of those who grit their teeth and bear it. It produces short-term results by burning the life energy out of those who embrace it to accomplish their illusions of success. The message is preached from political pulpits: hard-working Americans are the ones who deserve life and liberty. Or in Christianity, the obedient who produce good works are God’s chosen. This political-economic-religious doctrine produces slaves cruelly dominated by the devil of materialism. Hard work, good works, and success are all “things” that people produce. When lifeless things become more important than living beings, society loses its way and becomes terminally ill. Depression and anxiety are symptoms of this sickness. Things have value when they promote life. When they become ends in themselves, suffering ensues. We fall out of alignment with our own hearts, for you lose integrity when you abandon yourself to accomplish your dreams. The Protestant work ethic is a form of human sacrifice. It’s the sacrificial rite of ripping out your heart to gain a deity’s promise of eternal life: you die in the process.

Through this violent doctrine, we kill each other and we kill ourselves. Anyone who loses her ability to work hard because of hardship, oppression, circumstance, disability, or poor choices becomes the enemy of society, the object of our projected self-hatred. Even those who benefit from government entitlements are only judged worthy of life if they show motivation. We hate those who cannot work hard because we hate what we fear most in ourselves. We all know that we could easily be plunged into despair or disability in an instant, and that crippling urges to not produce exist within every one of us. This fear is the reason we buy into hypocrisy and enact this lie as the functional law of the land.

Under the Protestant work ethic, those who succeed love themselves when they work hard and loathe themselves when then don’t (and treat others in the same manner). The acceptance of oneself based on one’s successes is a subtle form of self-rejection: it is a failure to accept myself based on who I am, a compulsion to attach my worth to some external object that isn’t really me. When I do not value myself, I look to outside things to define my identity. I become a businessperson, a father, a lover, or anything I do that isn’t me. I do not do it well: I cannot because I am not myself.

Mere grit doesn’t produce hard workers. It might produce people who look like they work hard, but they are only capable of working below capacity. But people who love themselves and love their work work hard and get confused by people who go on and on about needing to work hard. The real workers don’t work hard because they have willpower. Willpower isn’t a real thing in itself: it’s the result of people having or lacking access to themselves.

Do we actually want to help people work hard? Then we need to stop judging people who have trouble working or accessing their willpower and find ways to actually empower them. But maybe our hidden agenda is to make ourselves feel good for our hard work by putting other people down, or justify to ourselves why we keep working hard at jobs we hate doing. People want to be worshiped for their willpower because they are masochists caught in a cycle of self-denial and self-hatred because they hate what they do but see no way out. Thus, they resign themselves to a life of quiet misery and adopt the belief that hard work is suffering, and bulling your way through is the only way to make it. For such people, there is always a reason why they are stuck in inescapable situations of miserable hard work and can never get out. These people take out their rage on others who don’t live as they do. Anyone who isn’t suffering is labeled entitled, lazy, or lucky. These people expect to be worshiped by “less successful people” because they crave affirmation. They do not believe that you can succeed by doing what you love because they do not know. They do not want change because that would mean admitting all this hard work was a waste of life. Which is exactly what it is.

Ironically, the cardinal sins of laziness, procrastination, and lack of motivation can be our soul’s way of saving our lives. Many people in our world get burned out and become depressed, unable to work, because their work is mostly suffering. Life does entail some amount of gritting the teeth and doing unpleasant things, but if this becomes our main way of being, then we are no longer alive. We going through the motions, dissociating from ourselves. The solution to the Protestant work ethic is to believe in the power of being. Being is always a stronger force than achieving. A river cannot help but flow, and people can’t help but work hard when they know what they love and how to it. People who discover who they are discover what they love. Anyone who ties his identity to what he does lacks access to himself, and cannot truly succeed, even if he achieves everything he sets out to accomplish. Unconditional love, the love of self and the other in failure and success, in doing and not doing, is how we work hard and heal from the sickness of materialism. Living from the heart is the cure to workaholism and low motivation. The solution to the problem of hard work is simple, though it may require a lifetime of unlearning our clever adult ways and learning to be as children. To free ourselves, we must take on the risk of becoming who we are.