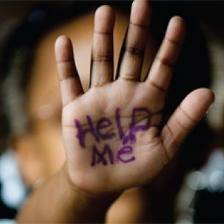 Fundamentalist religiosity often looks like a severely traumatized individual trying to resolve his trauma in unhealthy ways. Fundamentalist Christianity attempts to resolve the trauma of humanity suffering by re-enacting it on other people in the vengeance of divine judgment or the self-punishment of sin. The psyche’s strategy to heal trauma is re-enactment: re-creating the traumatic experience in real-life situations and within the mind. The hope is that, once the traumatic situation is recreated in the present, there will be an opportunity to face it (face yourself) and accept it (accept yourself) with compassion, to reintegrate the part of the self that was cut off through dissociation. Re-enactment is why people who have experienced abuse keep finding themselves in abusive situations they do not desire, why veterans with PTSD are flooded with terrifying memories they do not want. This is all an attempt to face the unfaceable, to find relief through self-acceptance.

To a large degree, the Western religious enterprise was an existential inquiry into the immensity of suffering. Seeing suffering all around, humanity asked, how can this be, why, who is to blame, who will be punished for it all? God was envisioned (in part) in response to the dilemma of the existence of suffering. God would “make things right.” There is a sense of unspeakably to a traumatic event because it is so awful that it almost defies comprehension. There is no making sense of trauma, but we try. We try to understand because there is a small sense of control in understanding. This always means finding fault, assigning blame. It is a lighter burden to live with the guilt of self-blame and blaming of others than to resign oneself to the terror of a fundamentally unsafe, inexplicable reality.

The idea of god puts suffering comfortably into a master plan where trauma has a rhyme and a reason. Unfortunately, this kind of explanation is a response to trauma based on trauma; it powers and perpetuates the trauma cycle. When we try to make sense of the senselessness of trauma, we assign blame. It has to be someone or something’s fault. It cannot just be the way things are. We always end up blaming ourselves, and other people in our lives. Survivors of tragic accidents who witness the death of a loved one often relate, “I wish I had died instead. Why did I survive?” They blame themselves when there is no one to blame: it is a tragedy. But if we accept that there is no one to blame, and it is no one’s fault, then the universe is a place when unsafe and unfair things just happen. How can we live with such terrifying uncertainty in the wake of tragedy?

In the fundamentalist religious system, the explanation for suffering is that people have sinned. Suffering entered the world as a result of sin, and it continues to exist because people are sinful. We are “bad” at the core, so we create suffering. But by blaming ourselves as having a “sinful nature,” we re-enact the original trauma of suffering through shame and self-punishment. We constantly remind ourselves of the suffering in prayer and confession for sin. We nail ourselves to our own crosses over and over again.

Fundamentalist religion re-enacts the trauma of suffering by assigning blame to the self, and through the retribution of divine judgment. Divine judgment is nothing more than a re-enactment of trauma. If we can locate suffering within the choice of other individuals, we can destroy those people and destroy our suffering. If it’s something wrong with them, it’s not something wrong with reality: reality becomes safe and we can let down our hyper-vigilant traumatic defensive attempts to control the universe. When Christianity punishes people in hell or destroys them in the apocalypse, it claims to make all the wrongs go away. But this is acting out of trauma. This is an attempt to resolve suffering by creating it. The punishment of eternal torture or divine fury re-creates the original trauma of suffering. Vengeance feeds on the energy of trauma, creating more of what it desperately wants to resolve.

We can see this from religious history. The idea of hell was solidified in a time period when the Jewish people were severely oppressed by foreign empires. They saw their babies dashed to pieces before their eyes, their temple was destroyed; all kinds of unspeakable atrocities befell them. They imagined the worst possible punishment on their enemies in order to counteract the severity of the trauma: only eternal torture could match the enormity of the wound. Yet hell creates a false and deceptive sense of justice. It resolves the pain of one group of people by inflicting it on another group. It is a displacement of traumatic energy. Hell is the immortalization of suffering, not the solution.

The concept of sin is Western religion’s solution to trauma. Sin is a blame game. Sin blames suffering on god’s enemies through the vengeance of physical punishment or psychological guilt. There is no escaping from the vicious cycle of trauma within the religious system because it was built around trauma. Non-judgment is the solution. If we understand trauma, we see there is no such thing as fault at an ultimate level. Suffering simply is. Unsafety is a fact of the universe. By trying to tame it in our understanding, we only create more of it. We split ourselves into pieces and repress memories along with parts of ourselves when we face severe pain, dissociating in order to survive. As a result, we find ourselves trying to destroy ourselves, people, or situations that remind us of that pain through mental repression or outright destruction. Our lives are built around patterns of avoidance. Yet even as we try to avoid, our minds attempt to heal us by forcing us to take the pain–constantly bringing it into our lives. This is a miserable conflict.

The way out of the cycle is to accept the unacceptable, to stop trying to define, control, and tame reality through blame. Suffering and unsafety are facts of the universe. Yet love and connection are just as fundamental to existence. Fundamentalist religion is a traumatized way of approaching life, a rejecting and accepting different parts of reality and oneself in order to cope with the wounding of existence. Compassion is the key. Compassion is a loving acceptance of all that is and all that you are. We comfort people in agony, “It’s not your fault.” This is non-judgmental, compassionate acceptance. The solution to suffering is not a crucifix: it is an embrace. Stop nailing yourself to a cross, stop asking God to bury the part of you that seems unlovable. Bring the embrace of compassionate awareness to the ugliest parts of your experience, and you will reintegrate the part of yourself you lost touch with when you dissociated from the agony of the original trauma.