Eat The Fruit of The Tree of Life: Solving the Ecospiritual Crisis of Climate Change and Existential Despair by Having Mystical Experiences 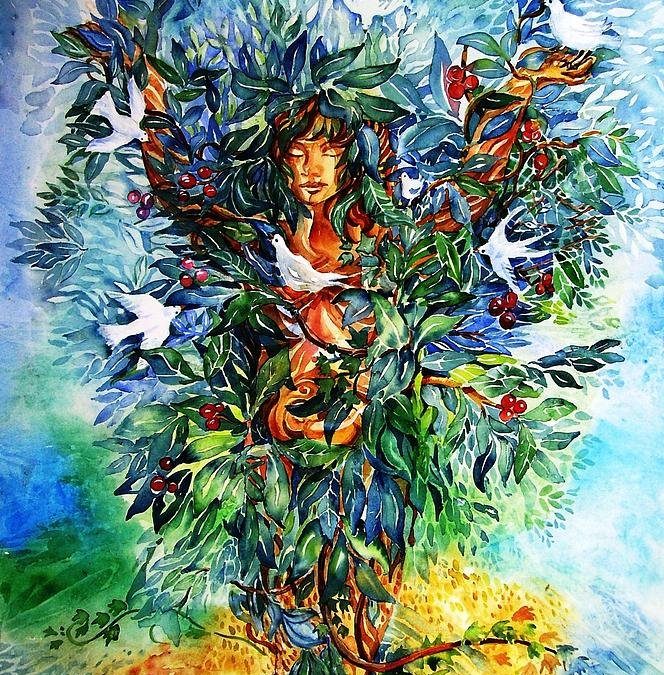 The Tree of Life is a symbol central to many spiritual traditions. It is perhaps more relevant now than any other time in human history. We face a great ecospiritual crisis: the destruction of life on Planet Earth and human consciousness. Climate change, war, and the mental illness of a meaningless life are symptoms of confusion about nature, a collective forgetting of where life comes from. Ecospirituality is the call to eat the fruit of the Tree of Life: to heal nature and the human spirit by having mystical experiences.

The Tree’s symbolism is rich and life-giving. Its growth represents evolution, its sap consciousness, and its fruit direct encounter with transcendence. The Tree’s growth, evolution, is the unfoldment of nature and the creation of God: the incarnation of inanimate into organism, potentiality into specificity, and inspiration into human living. God and creation are the same thing, perhaps better expressed by the word Nature. Nature is the god principle of existence: uncreated yet eternally creating itself as creation, beyond morality, subject only to itself.

The Tree of Life symbolizes the seamless unity of material and immaterial realms as one natural bi-unity, with its roots in the earth and its branches extending to the heavens. Judeo-Christian religion introduced a destructive, lifeless god image into human society by separating God from Nature. The rift in the cosmos introduced by religion’s dualistic God/Nature split is the isolation of life from spirit. Apart from Nature, God is a lifeless tree. The Bible calls this idolatry, which is the essence of organized religion as well as institutional meritocracy. We, humanity, hacked off the Tree’s branches and poisoned its roots, substituting substance with form, meaning with profit, spirit with religion. We doomed the Tree of Life to destruction.

Entheogens, or psychedelics, are said to produce experiences of God within. There is a reason why experiences of the divine come from eating plants and fungi that grow out of the earth. This points to the archetype or symbol of the Tree of Life. The bi-unity of spirit and matter in a sacramental substance safeguards against the separation of spirit from matter: the destruction of God/Nature introduced by the creation of religion’s God and other dualisms.

If we continue on failing to experience ourselves as branches in the Tree of Connection, the Incarnation of godhead, we exist only to ourselves as isolated organisms, fending alone in a hostile, paranoid universe. Destruction is the inevitable consequence when we go without experiences of transcendent connection. Our consciousness remains asleep, disconnected from the rest of nature, so we do not feel Nature’s pain even as we destroy it and ourselves along with it. Those who have tasted of the divine-nature bi-unity through psychedelics and many other means know Nature’s pain. Psychedelic and spiritual movements are responsible for much of the environmentalism that exists in our world today. Movements that cultivate life-giving rituals which connect us with our inner and outer Nature must continue to increase if the Tree of Life is to be preserved in our world.

In the Bible’s creation myth, isolation from the divine and eternal life resulted from choosing the fruit of the Tree of the Knowledge of Good and Evil over the fruit of the Tree of Life. In today’s world, we have traded essence, spirit, and life, for a dead hollow shell of religiosity and dogmatic absolutism. We have traded the experience of divinity for symbols of it: word, lifeless rituals, rules, and linguistic abstractions. Faith and stories about experiences in religion have taken the place of real spiritual encounters. Political doctrines of success and freedom have taken precedence over the sacredness of human and animal life.

A choice to eat the fruit of the Tree of Life is a choice to let go of the control of intellectual certainty and open to the at times chaotic and destructive godforce of Nature in the mystical experience. Yet it is a seductively destructive safety to cling to the intellectual distancing of a life devoid of personal spiritual encounters of Nature. When we expand consciousness through mystical contact with ourselves, others, and the world, we risk losing our (false) sense of control through the mastery of knowledge. We lose our idolatrous sense of ourselves as supernatural gods ruling over Nature, separate from it and superior to it. Eating the fruit of the Tree of Life entails the sacrifice of the illusion of divinity in isolation: the narcissistic god image, the self as dominator king of the universe. We choose to open ourselves up to chaotic forces of the Wild greater than ourselves. Yet it is these very forces of Nature that threaten to destroy us when we lose conscious contact with Nature and so also ourselves through plagues of climate change, mass depression, and economic collapse.

The fruit works its healing magic within each eater by bringing her into deeper contact with her own nature and greater Nature. It reunites the fragmented parts of the self: the spirit with the body, the heart with the mind, the inner victim with the inner perpetrator. It reunites the self with the Self of Nature, creating a felt experience of contact and unification with the plant, mineral, and animal kingdoms, as well as other people. The command of the Tree of Life that it enacts when we eat its fruit is Love Your Nature As Yourself. This is what it means to say that God is love, and the love of God is the salvation of the world.

Andrew Jasko, M.Div., speaks about exposing psychological abuses within religion and reclaiming spirituality. Jasko is a former minister, trauma recovery coach, and working towards his doctorate in clinical psychology.