The Psychology of Martyrdom: How Ideologies Weaponize Fear as Hatred in Service of Love 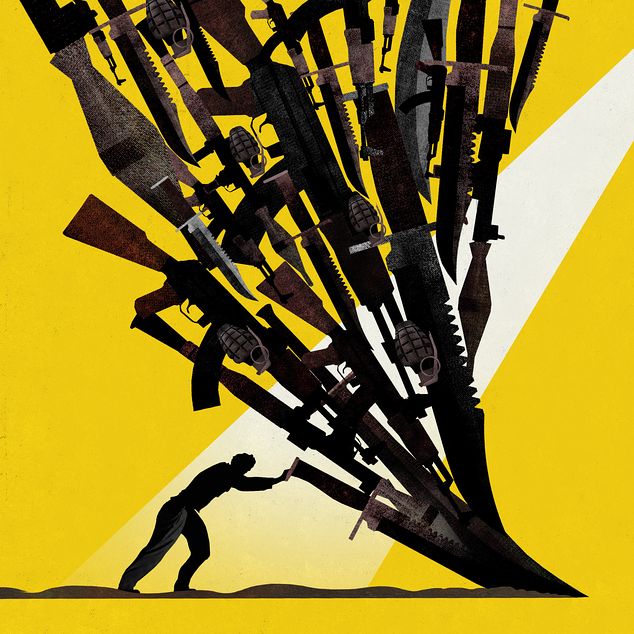 Martyrdom is an ideology that weaponizes its victim to conquer an indigenous culture in Holy War through human sacrifice. Human sacrifice appeases the wrath of diabolical gods of human aggression, which is mobilized through a persecution complex to satiate the greed of an Evil Empire. Martyrdom is insidious because it is duplicitously marketed by the colonialist power as a nonviolent, peaceful method of lovingkindness. Martyrdom is the tragic practice of sacrificing one’s life to advance the ideological agenda of religion through suicide. (Although the definition of martyrdom can also include people who are killed against their will, the type of martyrdom under discussion here is sought out intentionally by the martyr.) Martyrdom is the weapon of religious or secular colonialism concealed from itself.

Monotheism results in a vision of world conquest because it is based on a monarchial cosmology. A Universal Ruler implies a singular universal ruling ideology. Because there is One True King, the Kingdom of God (or the ideology) is the sole authority. There is one God, one way, and one truth. Diversity implies rebellion. Diversity of culture, race, and religion are all threats to the Universal’s claim to hegemony. If there is another way, the King is no longer necessary. Monotheistic-type, exclusionary ideologies are necessary tools of empire world forces. By claiming to be universal truth, a political or religious body can de-humanize, demonize, and kill any subject, ideology, or culture that does not the empire’s definition of what it means to be human, moral, or scientific.

Ideologies recruit soldiers to their Crusades through the creation of a Persecution Complex. Messages are devised to convince vulnerable citizens that outsiders pose a threat to their way of life or even survival. Real situations of conflict or aggression from the targeted population are seized upon by the empire as an opportunity to create mass hysteria among the targeted audience. Individuals surrender their freedom to the empire (enslavement) and pledge obedience to its maxims in order to achieve a sense of security. This sense of security contains the seeds of its own destruction because it is motivated by survival panic, “fight energy,” which mobilizes aggression to destroy the perceived threat. Since the individual has surrendered her identity to the lifeless construct of a corporate ideology (“God,” “socialism,” capitalism”), the sacrifice of death in martyrdom becomes a viable, logical option. The individual achieves a kind of eternal life through the hero narratives of the empire.

A persecution complex creates a blood haze of paranoid aggression. Hatred at a deeper level is an unconscious fear: the belief that “family values,” “religious freedom,” and economic wellbeing are being consciously attacked by a maniacally sadistic group of demon-people. Paranoia is characterized by exaggeration, which enables the dissociation from moral conscience that is dehumanization. People and their way of life are supernaturalized to be zombie-like, one-dimensional forces of evil. No longer human, they can be destroyed without guilt (in fact, with celebration). Hysteria is created by propagandistic preaching of salvation narratives, which depict a cosmic struggle of good vs. evil. Individuals and entire cultures appear as inconsequential grains of sand, infinitesimally small statistical, in a vast sea of supra-human forces. The martyr genuinely believes he loves the people he conquests. If the dehumanized individual converts, he becomes a human object capable of receiving love. If he persists in rebellion, justice is served and violence is nothing personal, since personhood does not truly exist.

Martyrdom is ingenious because it recruits people by maintaining an illusion of love through denial. People are given a means of channeling their unconscious hatred while maintaining a view of themselves as loving, moral, good citizens. As humans, we bury our hatred through denial in our unconscious minds because it is considered unacceptable, and there are grave consequences for expressing it. We fear our hatred and prejudices; they threaten our integrity and sense of internal coherence; indeed, our sanity. But the danger of being unaware of our hatred is it makes us open to manipulation.

There is a tremendous emotional cost to living in moral compromise. The psyche wants to rid itself of the pent-up emotional energy of internal conflict, and it vomits up its disavowed hatred through projection, expressing and eliminating hatred by seeing it in other people instead of oneself. Martyrdom and slavery to the colonial empire and its identity are a means of catharsis, a misdirected attempt to live in integrity and free the conscience from its dissonance. The empire frees us from our conscience by giving us permission to act out the worst of our impulses. Indeed, we are praised as moral exemplars and spiritual lights if we do. It is an ancient strategy of evil to conceal its darkness with garments of light: “And no wonder, for Satan himself masquerades as an angel of light. It is not surprising, then, if his servants also masquerade as servants of righteousness” (2 Corinthians 11:14-15).

Empires encourage martyrdom by promising rewards that far outweigh material success. These can be literal heavenly riches, eternal life, war songs and medallions, or a heroic legacy: “Blessed are you when people insult you, persecute you and falsely say all kinds of evil against you because of me. Rejoice and be glad, because great is your reward in heaven, for in the same way they persecuted the prophets who were before you” (Matthew 5:11-12). A historical narrative is constructed where false comparisons are made with great moral exemplars like Jesus, Gandhi, Martin Luther King, and Mother Theresa. People who feel purposeless and disenfranchised are given the psychological reward of spiritual purpose, considering themselves chosen and blessed for their suffering–which now has cosmological importance.

Powers also motivate believers to paranoid violence by threatening to revoke membership: “In fact, everyone who wants to live a godly life in Christ Jesus will be persecuted” (2 Timothy 3:12); “Everyone will hate you because of me” (Jesus, Luke 29:17); “Be faithful, even to the point of death, and I will give you life as your victor’s crown” (Jesus, Revelation 2:10). If a citizen is not persecuted, he is not a real citizen. Either his life is in jeopardy through the threatened annihilation of communal rejection, or it is in jeopardy through the rejection of outsiders in persecution. At least the latter option involves choice (or the illusion of choice) and the dignity of state recognition (=humanization).

Indigenous populations who are keen to colonialism rightly perceive the threat of the want-to-be martyr, well-intentioned and benevolent as he presents and believes himself to be. However, the self-dense motivated warnings of the indigenous are interpreted by the martyr as a heavenly sign of blessedness. Instead of backing off, the believer is emboldened to press forward with his message of violence concealed as love. His own life is no longer at stake, but Truth itself. The ideology, which has no life in itself, is poised to swallow up the lives of both victims: the colonist and his prey. If the martyr succeeds, he flattens the life of the culture of the colonized. If he dies, his message is amplified. Either way, violence results.

Through religious and political messaging of martyrdom, entire continents have been put into economic and cultural captivity. Today, teenagers go on missionary trips to indigenousness peoples they know nothing about. They are encouraged to put themselves in dangerous situations, bringing back “war stories” of being protected by God in the face of the hostility of the native peoples. Lives are needlessly lost as a result of this so-called Great Commission, the false good news message that is violence to human dignity. We present ourselves as human sacrifices an effort to eliminate our hatred. We believe this pleases our version of god, whether that god is a secular ideology or a religious deity. But only devils accept human sacrifice.

The task of moral integrity that faces every human is to discover our hatred and understand the fear that inspires us to deny it. Undercurrents of hatred flow in ideologies we perceive to be necessary and even loving. Any ideology or way of life that carries the authority of an Absolute Principle should be thoroughly scrutinized to see if an unconscious fear lurks beneath the surface. The hostility of outsiders to our belief systems must be welcomed and entertained as guests with a potential message of liberation, an opportunity for critical reflection. Whenever a god achieves preeminence over life, human freedom cannot persist.