A Psychological-Theological Repudiation of Opposition to Abortion by Christian Fundamentalists in the Wake of Roe v. Wade’s Overturning 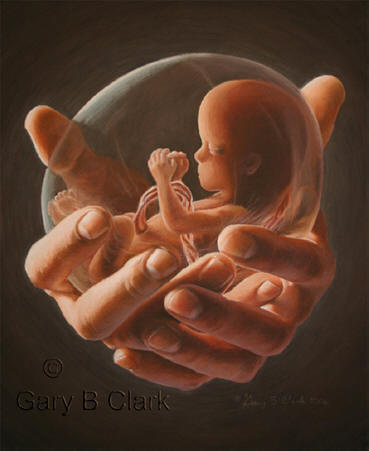 The cross Jesus was crucified upon has become a sword in the hands of the militant Christian fundamentalists who perpetrate the violence he experienced, in an act of Godself-mutilation. Were Jesus’s dying words, “Father, forgive them, for they know not what they do” intended for the Romans or his followers who would soon betray him in the same way?

Jesus is a fetus aborted on the cross sitting atop a million steeples of churches where the sanctity of life is not regarded once it is actually born. What is sacred about life, if that life cannot be tolerated for being uniquely human in the ways Divine Nature evolved it to be, in all its varied expressions of color, sex, and creed? God’s sexual orientation is trans-personal, fully indwelling all expressions of difference and transcending idolatrous human attempts to confine spiritual aliveness to a gendered, othered, other-than-Self box.

The divine cannot be divided from itself except in illusion, where spiritual eyesight is traded for the blinding certainty of black-and-white thinking, “this is God, and this isn’t.” Those who deem themselves chosen become God-forsaken in the process of condemning others to an eternity away from love. Judge not lest ye be judged, they are sinners indeed who believe that original wholeness can be lost or granted by human tradition masquerading as divine law.

How did God’s children become crusaders? When they came to see those who did not believe like them as enemies to be feared instead of unexpected teachers of grace. The Jesus of apocalyptic judgment is the ultimate repudiation of Jesus the Nazarene’s cruciform sacrifice, which symbolizes the split in human consciousness caused by monotheistic conceptions of divinity as separate from humanity and nature. And Evangelical Christianity incarnates this tragicomic divine contradiction to this day in its blasphemous gospel that love is exclusionary.

Christianity is a religion based on the idea of ritual human sacrifice as means to atone for wrongdoing and expunge guilt (the sacrifice of Jesus by his Father God in the New Testament as well as ritual animal sacrifice in the Old Testament). Interestingly, the fundamentalist Christian outcry against abortion is based on (tenuous) theological arguments that abortion amounts to a genocide entailing the human sacrifice of the unborn to dark demonic forces. Fundamentalists believe God’s judgment on the United States for this supposed atrocity is pending, and so they have overturned Roe vs. Wade and now seek a total ban on abortion.

Yet Christian fundamentalism has not atoned for its own genocidal and sacrificial impulses. In the Bible, in the Old Testament, God commands the ritual slaughter of so-called unclean nations and infants in holy war. They are considered unclean and abominable because they hold different religious beliefs. And fundamentalist Christianity in its religious exclusivism and intolerance embraces an energy of human sacrifice. Fundamentalists, emboldened by New Testament teachings, ritualistically sacrifice humans they deem to be other–people of different sexual orientations, those who leave the religion they label as apostates, and people of other faiths–on the altar of self-righteous, religious exclusivism, as a means of narcissistically bolstering their own identity status as the chosen, pure divine race. Such religious intolerance is the cardinal sin of pride, as it is said. But it is justified by biblical Scriptures that they revere more highly than the blood of Jesus beating in the hearts of those they persecute.

This biblically-inspired sin has led to the theological justification of violent inquisitions of othered groups throughout Church history and patriarchy and violence against women in this present violation of women’s human rights to bodily autonomy. It may indeed lead to literal fascistic violence against homosexuals and minorities in the not-so-distant future, as it has in many governments where Christian theocracy has taken hold throughout history, justified by fascistic politicians and their religious enablers who eagerly embrace the fascist theologies taught in the Bible.

One wonders, are Evangelical and fundamentalist Christianity’s obsession with stamping out supposed genocide and human sacrifice that has led to the violent, sacrificial devaluing of women’s lives and is coupled with religious-political actions against disenfranchised and minority groups and political opposition to helping the poor an unconscious acting out of guilt that symbolizes the sins of religious pride, genocide, and human sacrifice Christianity has never deeply come to terms with?

Only through embracing that which is deemed other, impure, and shameful in themselves with lovingkindness–sexuality, difference, uniqueness, weakness–may Christian fundamentalists be able to see the diversity they despise as abominable in others as the divine grace that may finally cleanse their guilt-stained consciousness. Jesus’s prayer is to be born again in the wombs of all his would-be followers whose progeny shall embody the sacredness of divine-human life through recognition that diversity is not other than divine nature.

Do you feel psychologically traumatized by religious harm, isolated and disempowered by trauma, and emotional or spiritual distress in your life? If you would like to talk with me for coaching support, schedule a free Inner Freedom Session. In this session, my intention is to help you feel deeply heard and supported, gain clarity, learn a few expert tips, and if it seems like I can support you further, see whether Coaching is a good fit for you.

I’m Andrew Jasko, Master of Divinity (M.Div.), MA Counseling Psychology In Progress, and I work to help you transform your trauma into the place of your power and connect to a healthy, authentic spirituality that works for you (whether that’s as a spiritual not religious, atheist, religious, transitioning, or agnostic identifying person). I was born into a minister’s family and became a preacher and missionary to India, after studying theology at Wheaton College and Princeton Seminary. As a Christian, my relationship with God was my passion, but unhealthy religious teachings caused me an anxiety disorder, sexual repression, and spiritual disillusionment. I felt alone, traumatized, and abandoned by the divine. After an agonizing crisis of faith, I rejected religion and spirituality. Then, I reintegrated a healthy spirituality through mystical, humanist, and holistic practices. My passion is to help you to heal and connect with your authentic sense of spirituality or purpose.