Crimes of Emotion: Emotional Repression and Toxicity in Christian Fundamentalism 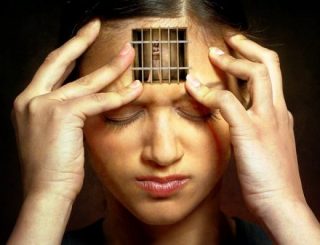 Christian fundamentalism criminalizes normal emotional expression and trains people to repress their feelings. Negative emotions aren’t merely unpleasant (which is bad enough); they become crimes of emotion against god. Emotion crimes come packaged with fear of punishment. God is a police officer who patrols the human heart, directing his all-seeing gaze against any inclination that displeases him. (“I the LORD search the heart and examine the mind, to give to each person according to what their deeds deserve” (Jeremiah 17:10). Christians are thereby taught to fear their negative feelings and to condemn themselves for even having them. Thus, when the Christian experiences an emotion she is not supposed to have, a split-second emotional repression occurs. The three emotions of fear, guilt, and shame arise in nearly the same instant. First, fear of judgment causes her to condemn herself for having the emotion and to condemn the emotion itself. She attempts to bury the unwanted emotion, pushing it out of consciousness through prayer, confession, Christian therapy, or bible reading. This works like a drug (if it works), giving her momentary release but ultimately increasing the pain of the buried emotion, which will find expression in her life in unhealthy ways at another time. Secondly, the Christian experiences guilt, the guilt of having sinned against god by harboring negative emotion, and the guilt of failing himself by not living up to his own standards of the kind of Christian and person he wants to be. Then, he feels shame. The Christian commits emotional crimes because his heart is criminal: The Bible teaches the heart itself is “deceitful above all things and desperately wicked” (Jeremiah 17:9). When he sins, the Christian is reminded that he sinned because his heart is wicked: he is sinful, and awareness of this is shame. In sum, the emotional criminal feels bad because the negative emotion feels bad, he feels bad about himself for feeling bad, and feels bad because he is bad and it’s all his fault.

This whole problem exists because of the dualism central to fundamentalist worldviews: creator and created, spiritual and material, good and evil. Fundamentalism splits reality into unnatural, artificially oppositional categories, especially when it comes to morality. Emotional states are put into the categories of virtue and vice. Thus, Christians are unable to simply experience emotions: they must also analyze and subject them to moral scrutiny. Is this emotion worthy of god, is it something that a good Christian should experience? What does it say about my level of Christian maturity? Not only is this kind of emotional scrutiny unhealthy and potentially crazy-making, it also creates an additional layer of emotional pain, compounding the pain that’s already present. For example, worry is usually considered a sin because it reflects a lack of faith. Instead of worry just being worry, anyone who struggles with starts to worry about worrying, since it is a sin to worry and they are afraid of being punished for sin. This creates obsessive thinking, which often drives Christian to take compulsive actions like going to church, praying, or performing good works in order to cleanse their minds of the resultant emotional chaos.

Many emotional states like envy, jealousy, anger, and fear are either considered sins or dangerous states bordering sin, according to the Bible. The goal becomes to escape and avoid these emotions and replace them with positive states through prescribed Christian rituals. On the flip-side, Christians are encouraged to cultivate positive emotional states like joy, happiness, and goodwill. Yet it is seldom acknowledged that positive emotions are not always beneficial. When religion treats emotions as moral categories, it misses the truth of what emotions are and represent entirely. Emotions have nothing to do with morality. Emotions are not good or bad; they simply are. Emotions reflect the emotional truth of the person who experiences them. This truth is neither right nor wrong, good nor bad; it is a statement of what’s going on for me internally. My emotions speak for my heart, they are like voices expressing the reality of my internal state. We benefit from emotions by listening to them non-judgmentally and with curiosity. Even outrageously disturbing emotions are not evil; for instance, desiring to kill someone who gives you a hug. They speak to something, perhaps a trauma, internal conflict, or unfilled desire. If I do not feel bad about having an emotion, then I have an opportunity to explore what that emotion means for me because I don’t feel compelled to stuff it away as quickly as possible. If I don’t immediately judge my positive emotion to be good, then I have an opportunity to notice that some of my pleasant emotions may not be serving me. For instance, I may feel good whenever I spend excessive amounts of money, but that doesn’t make such a behavior beneficial. Feelings are inherently neutral, and a healthy person will experience the full range of positive and negative emotions, depending on the circumstance. The fundamentalist approach to emotional life is so toxic because it introduces judgment into an equation where non-judgment is foundational to healthy functioning.

When I left Christianity, it took me a long time to stop viewing difficult emotions like fear and anger as “bad.” I learned that the bad emotions can be very helpful and appropriate, and that good ones can likewise be inappropriate. When we condemn and repress our emotions, we repress and shut ourselves down. The alternative is to listen with compassion, empathy, and curiosity. My emotions are my friends, though they may be highly unpleasant and obnoxious company. My emotions are my teachers. The simple practice of paying attention to my emotions opens up a doorway into my unconscious mind, giving me access to my deepest longings and wounds that need healing. Emotional health doesn’t mean not having certain emotions or having others, or achieving some kind of healthy ratio of positivity and negativity. It means being fully present with ourselves as we experience life. This is the art of self-love.