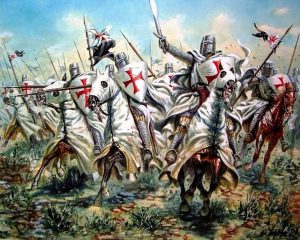 Christian Fundamentalism’s evangelistic message is framed as a Holy War Narrative. The biblical call to world evangelism, as interpreted through fundamentalism, is a dictatorial King’s strategic vision of world domination. Holy War is a central metaphor in the Bible. Now that literal Holy War is less acceptable, God’s Kingdom Regime is advanced through ideological warfare. The Supreme Leader’s followers are conscripted to the Great Commission, the Marching Orders and Manifesto of the Lord’s Army (=the Church). The Great Commission Manifesto commissions Christian soldiers to make recruits (=disciples) of all nations. Soldiers are brainwashed to complete ownership of the Supreme Leader and his Kingdom Regime. They are commanded to accomplish the King’s Manifesto at all costs, giving away all their possessions and sacrificing their physical lives for the sake of conversion in literal martyrdom, if need be (“So therefore, any one of you who does not renounce all that he has cannot be my disciple” Luke 14:33). Death for the sake of the King is considered the highest honor, even though it violates the personhood and autonomy of the martyr and the peoples he conquests. (Better for you to die in a blaze of glory by sharing the gospel then save your life and send your kids to college back home, I guess.) Christian soldiers are told they must obey every word from the King’s mouth without question. Total devotion is demanded at the level of thought, emotion, relationship, and community.

The Great Commission is a violent ideological global Jihad that culminates in the King’s violent physical planetary invasion, brutal slaughtering of most of humanity, and iron-clad rule of all humanity in the concentration camps of Heaven and Hell, through control and pleasure on the one hand or torture and pain on the other. The gospel is the propaganda messaging of the Kingdom Regime. It distorts words like love and justice, redefining them as conditional rewards given only at the cost of slavish devotion and sacrifice of one’s soul (this language is in the Scriptures). The King’s love is withdrawn and his fury is unleashed in eternal punishment upon Deserters, making an example of them through fiery torture eternal executions, displayed openly and celebrated ceremonially in front of all his followers: “They will be tormented with burning sulfur in the presence of the holy angels and of the Lamb. And the smoke of their torment will rise for ever and ever” (Revelation 14:10-11).

Christians converts are militarized and told they are soldiers in the army of the Lord. This messaging is taken up in the liturgy of churches throughout the world. Take for example, the lyrics of the Christian child soldier recruitment song, “I may never march in the infantry, Ride in the cavalry, Shoot the artillery. I may never fly o’er the enemy, But I’m in the Lord’s ar-my. (yes, sir!) But I’m in the Lord’s ar-my. (yes, sir!)” In the initiation ritual of baptism, converts symbolically die to their own will through drowning and are resurrected to eternal service of the Supreme Leader. All allegiances to self, country, and family are renounced or subsumed under the banner of the King, now and through eternity.

The Supreme Leader proclaims his Superior Race in the Israelite and Christian Nation, those who are “chosen,” “separate,” “in the world but not of the world,” a “royal priesthood,” “holy.” The Supreme Leader conquers by pitting humans against each other into warring camps of the chosen and the damned. Labels like infidel, unfaithful, sinner, and evildoer embolden and mobilize kingdom crusaders to persecute, objectify, and judge those who do not worship their King. Anyone who cannot be converted must be killed in the End Times genocide of the Lamb of God, God’s Final Solution.

The gospel propaganda represents divine conquest of human souls. Love and service are warped into weapons of conversion; hospitals, recovery clinics, and food kitchens are set up with the agenda of recruiting soldiers. The King’s Regime is internalized in the human heart, and free souls are turned into loyal slaves devoid of any purpose apart from the King’s agenda. Books like Joshua, ethnic-religious cleansing Jihad propaganda, are turned into ideological metaphors that are no less pernicious than literal violence, proclaiming a conquest of human souls. This turns humans against their own humanity. This is a centuries-long war against human dignity.

Holy War propaganda is pronounced in fundamentalist strains of Christianity but still present more subtlely in many Liberal-Progressive traditions. Liberal crusaders proclaim the superiority of their way in condescending doctrines like Universalism, which feign a shallow tolerance but camouflage a message that all ideologies and religions must be ultimately be brought under the Lordship of the One True King. When it fails to condemn oppressive and immoral teachings found within the Bible, progressive Christianity functions as a safe haven for fundamentalism.

Love and justice will never prevail in our world when we continue to support ideologies founded on notions of killing, warfare, and violence. This should be obvious. Yet we continue to value clinging to tradition and culture when we support the imperialistic impulses found in Christian Scriptures, over and against human flourishing. Violent ideologies are embedded in the Christian Bible and internalized in the hearts of many Christian followers. Christians should denounce and condemn such teachings, and practices founded on them. Sometimes growing up means admitting we were wrong and letting go of traditions we once held dear.